CEA is the focus of a display on hunger at the Catonsville Library. The display, installed the first week in February, showcases CEA’s efforts to help members of our community needing food assistance. It also gives facts about hunger (such as 1 in 8 Marylanders struggles with hunger).  A shout out to the library and thanks to Assistant Director Anna White (seen in the photo) who worked with CEA on the display.

UPDATE:  CEA had its first donation a few days after the display was installed; a library patron brought items she saw on our “current needs” list.

P.S. Check out the Catonsville Library’s Events listing at www.bcpl.info/events/datelines-catonsville 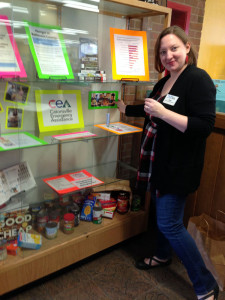 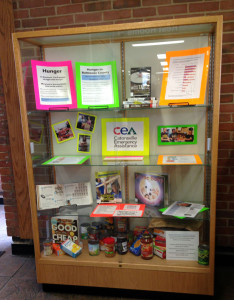 After nearly 25 years on CEA’s board, Pat Smidt, representing Catonsville United Methodist Church, is leaving the board.  “I’ll be around, and happy to help, but I thought it was time for someone new,” she said at her last board meeting in December.

Edwin Hostetter, a program specialist with the Fuel Fund of Maryland and an adjunct professor of religion and philosophy is the church’s new representative who began in January.

Pat recalled during her time on the board the organization’s many efforts to raise money for CEA’s work.  “One of the fun things we did was the Westview Thursday evening concerts,” she said.  “I was the hostess welcoming people, making announcements, and, of course, circulating in the crowd asking for freewill donations.”

Fundraising was her particular focus, working on various projects from bingo nights to dances.  She even took a fundraising course.  “The need for money is always there,” she noted.  Last year she held a pancake breakfast at her church for CEA. 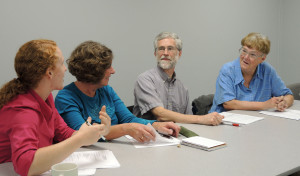 In addition to fundraising she said, “One of the biggest challenges we faced back then was hiring a director after the founder, Alice March, left the Catonsville Emergency Food Ministries as we were then called,” she remembered.  Alice, she added, had filled many roles.  Pat was on the board through several moves the organization made before settling at 25 Bloomsbury Avenue.

This will be a year of change for Pat as she also retires in the spring as a public health nurse case manager from the Baltimore County Department of Health where she has worked for over 30 years.  Not content to do just one thing, she also teaches medical technologist classes for assisted living facilities and is a consultant for Project Home.  “I’ll keep both of those jobs,” she said.  However, Pat is looking forward to spending more time at a home she and her husband have in Delaware.

“This will be a time for some new adventures,” she says of her pending retirement. The CEA board wished her well with refreshments and a gift at its December meeting, noting her long and extremely dedicated service to CEA, and the sentiment was clear that she’ll be missed.